The house where Shailesh Patel (inset) set himself on fire

A 35-year old man, who worked in London till last year, on Thursday, committed suicide by setting himself on fire at his house in Antarshuba village in Nadiad. In his suicide note, he claimed that he took this step as his estranged wife and family had threatened to file false dowry case against him if he didn’t meet their monetary demands. Antarshuba police has filed asuicide case and started the investigation.

Shailesh Patel (35) a resident of Antarshuba village near Kapadvanj town, had returned to India last year after working in London for seven years. He had come back in 2016 to get married to Bhumika Joshi. A year ago, the couple began facing marital issues and Bhumika left Shailesh to live with her parents. On Thursday morning, Shailesh set himself on fire and died before he could be taken to the hospital.

Antarshuba police found a suicide note from his house which was written on a 20-rupee stamp. He mentioned four names Bhumika, brother-in-laws Prashant Joshi, Sanjay Joshi and Janak Sharma and accused them of being responsible for his suicide. Shailesh said in the suicide note, “When I was in London I had sent these people some jewellery and money for business and personal use. When I returned, they not only did not give back my money they also started sought money from me. They threatened to file false cases against me.”

Look at the faces of the boy’s parents !! Super cartoon 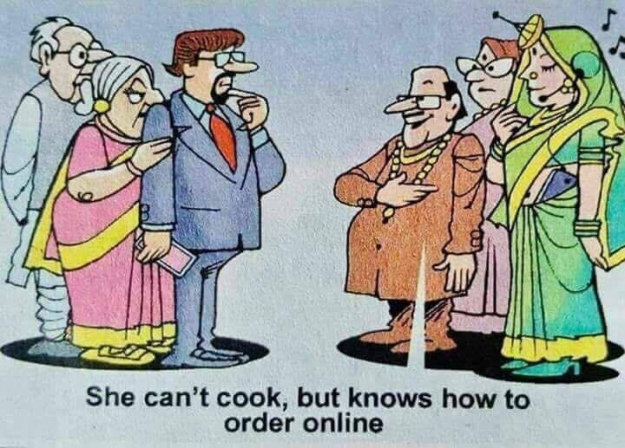 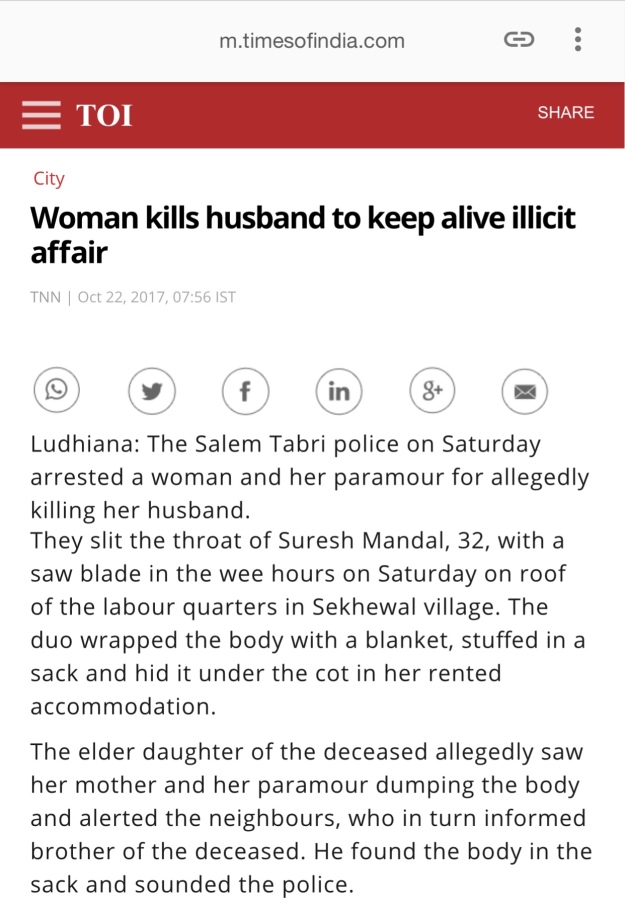 Ludhiana: The Salem Tabri police on Saturday arrested a woman and her paramour for allegedly killing her husband.

They slit the throat of Suresh Mandal, 32, with a saw blade in the wee hours on Saturday on roof of the labour quarters in Sekhewal village. The duo wrapped the body with a blanket, stuffed in a sack and hid it under the cot in her rented accommodation.

The elder daughter of the deceased allegedly saw her mother and her paramour dumping the body and alerted the neighbours, who in turn informed brother of the deceased. He found the body in the sack and sounded the police

Suresh was a labourer. The accused were identified as Bijli Devi and her paramour Akhilesh Kumar.

The police have registered a case under Sections 302 (murder), 201 (Causing disappearance of evidence of offence) and 34 (acts done by several persons in furtherance of common intention) of the IPC against Bijli and Akhilesh on the statement of Suresh’s brother Dev Anand Mandal.

The police have also found the weapon used in the crime. 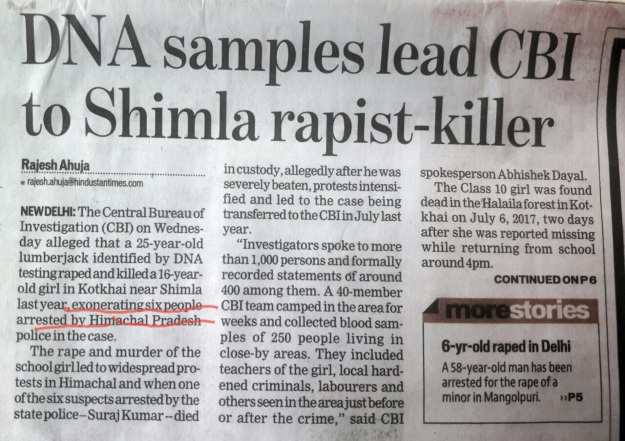 Representative image
GURUGRAM: A Rewari court has ordered legal proceedings against a middle-aged woman for allegedly filing false cases against several men, including her ex-husbands and their family members, since 1996 to extort money or for other benefits.
Phalit Sharma, additional district and sessions judge, Rewari, passed the order a couple of days ago while hearing a 2017 case involving a policeman, who had been in touch with the woman since 2010 and was accused of raping her repeatedly. During the trial, it came to light that the allegations levelled against the cop were all fabricated.

The court acquitted the cop and order prosecution against the woman, a Rewari resident, under Section 211 (falsely implicating someone with intension to hurt) of the IPC. The charge, if proven, may result in a penalty or up to two year’s imprisonment or both.

During the investigation into the 2017 case, it was found that she had similarly implicated several men, including her ex-husbands and in-laws, in the past too.

In 1996, she had filed a complaint of rape against the father and brother of her first husband Harish Chander, alias Nehru. But eventually, she withdrew her complaints against the duo allegedly after extorting money from the ex-husband and his family.

Similarly, she had accused Manoj (in 2003), Surender (2013) and Pradeep (2014) — all her former husbands — of rape and domestic violence, and later settled the cases for money. In 2012, she had also accused Rajender of sexual assault after a long-term relation with him, but backtracked on her allegations in court. She then married the man the day he was acquitted by court in the rape case.

In the latest case, the woman filed a complaint on June 7 last year and alleged that the policeman had raped her on several occasions. She also alleged that the cop had put pressure on her through her relatives for a ‘compromise’ and used his official power to warn her against filing any police complaint.
Based on her complaint, an FIR was filed against the cop. But after months of trial, the court, in its order, observed that the woman created a totally baseless story without any evidence — verbal, medical and circumstantial — to prove her allegations. “The complainant had misused law to falsely implicate the accused (the cop) in a manner similar to earlier cases of rape,” observed the court.