Congress MP Dr.Shashi Tharoor has introduced a private bill in the Lok Sabha to make marital rape a crime. 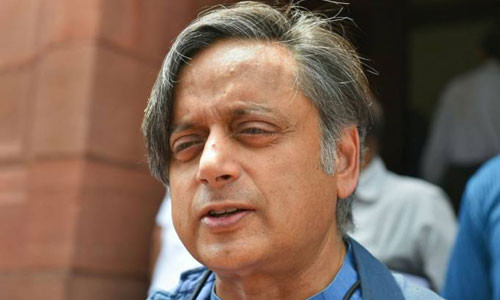 The Bill proposes the deletion of Exception 2 to Section 375 of Indian Penal Code, which states that sexual intercourse by a man with his own wife is not rape.

The Bill titled Women’s Sexual, Reproductive and Menstrual Righst Bill 2018 also adds a proviso to Explanation 2 that "the women’s ethnicity, religion, caste, education, profession, clothing preference, entertainment preference, social circle, personal opinion, past sexual conduct or any other related grounds shall not be a reason to presume her consent to the sexual activity."

Introducing the Bill on Friday, Tharoor explained that the Bill’s central idea was the "agency of women".

The existing laws fail to recognize ‘woman’ as an individual capable of making her own choices, specifically her sexual choices as a wife and her reproductive choices when pregnant, the MP from Thiruvananthapuram said.

The Bill further proposes amendments to the Medical Termination of Pregnancy Act 1971.

The name of the Act is proposed to be changed as ‘Legal Termination of Pregnancy Act’. This is on the ground that the usage of the word ‘medical’ in the title of the Bill created ambiguity, which mainly impacted rural areas as the doctors there feared to interpret the law in case of an arrest under Section 312 of the Indian Penal Code. Section 312 punishes anyone who causes a voluntary miscarriage including the woman herself.

The Bill grants women absolute right to termination of pregnancy where she may terminate pregnancy merely by her request until the 12th week of pregnancy. The women also gets conditional right to terminate pregnancy until 20th week. This right is conditional on a risk to the life of the pregnant woman or of grave injury to her physical or mental health, or if there is a substantial risk of physical, mental or genetic abnormality of the foetus after being certified by at least one Registered Medical Practitioner.

Pregnancies caused by rape or by failure of birth control methods are deemed to constitute grave injury to the mental health of the woman.

Further, the Bill grants limited right of abortion until 24th week. The Act limited termination of pregnancy to the 20th week of pregnancy unless the survival of the woman was at risk. "This led to vulnerable women like victims of rape and disabled women who had no risk of injury, threat to their life or foetus with an abnormality be embroiled in a legal dispute for their right to abort. In order to avoid an added trauma for these vulnerable women, the limit is extended to the 24th week. It is not indefinite, as around 22-24th week a foetus becomes viable i.e. it has the ability to live outside the womb of the mother, upholding the foetus/child’s right to life over the choice of the mother", states the explanatory note added to the Bill.

The Bill suggests amendment to Right to Education Act to make provision for free distribution of sanitary napkins by schools.

It also mandates that all public authorities should ensure availability of sanitary napkins, free of cost, at offices.

Woman, lover who killed husband held, had spiked his food with 30 sleeping pills – Times of India

THANE: The 28-year-old homemaker and her paramour who were on the run after allegedly murdering her husband and trying to pass it off as an accidental death by taking the body to Thane civil hospital on December 29, were finally nabbed from Neral on Tuesday.

They reportedly told interrogators that they had spiked the victim Gopal Naik’s food with 30 sleeping pills and even injected him with sedatives to make him dizzy so that it would be easy to bump him off. As he was a gym instructor, he was well-built. They told police that he even pleaded them to spare his life as he wanted to care for his seven-year-old daughter.

The Kasarvadavli police said that the accused, Priya Naik and Mahesh Karale (25), met on a social networking site a year ago and were in a relationship. “Recently, when Priya was having a video-call with Karale, Gopal caught her,” said an police officer. As their affair was exposed, the duo decided to bump off Gopal.

On Saturday evening, Priya fed Gopal dinner spiked with 30 sleeping pills, which made him dizzy and sleepy. Priya had also got him beer. Minutes later she called Karale to her flat at Shramsafalya building in Gaimukh area. The accused revealed to the police that they had planned to kill him after he slept, added the police.

As Naik was well-built and muscular, the duo did not want any resistance and also injected him with some sedatives to make the killing easier for them, said the police. “The overdose of the sedation left him drowsy and the duo first hit him with a heavy object causing bleeding and strangulated him to death. They then carried the corpse on a scooter during the wee hours of Saturday to Thane civil hospital,” said senior inspector Datta Dhole. “Gopal’s left leg was affected with partial polio and when he was seated on the scooter, the legs which were dangling out scraped the street and were bleeding.”

“They fled as the hospital staff took the body to post-mortem and for the fear of getting caught. They went to Matheran, stayed there for two days then came back to Kalyan and while on the way to Neral, they duo were nabbed,” said Dhole.