West Bengal: 7-yr-old murdered by mother and her teenage lover after he saw them in compromising position | India News

KOLKATA: A seven-year-old boy was allegedly killed by his mother and her minor lover because the child saw the two together in a ‘compromising position’ in South 24 Pargana’s Jaynagar on Thursday.

The body of Sadhan Mondal, a resident of Mondal Para area of Rajapur Village, was found inside a sack on Monday. The police have arrested Sadhan’s mother Sagari (28) and her 14-year-old partner in connection with this murder.

Sagari lives with her husband Gostho Mondal, a farmer, and son Sadhan in Mondal para. Their neighbor Sachindranath Sardar had moved to Kolkata with his wife, but their two sons lived near the Mondal in the same village.

Sadhan was reported missing since last Thursday. Following Gostho’s complaint, the police began their investigation. They found the boy’s body on Monday. After news of the murder spread, locals attacked Sardar’s house.

The police then questioned all the residents and came to know that Sagari was having an affair with the 14-year-old boy. After some inconsistent statements, Sagari eventually confessed to the crime.
This is how the events unfolded. On Thursday,
Gostho went to the field for work, as usual. Sadhan was playing outside. The teenager decided to take advantage of Sagari being alone and went inside her room. When Sadhan returned home unexpectedly, he found his mother with neighboring ‘dada’ (elder brother) in a compromising position. The angry child threatened to inform his father. Without wasting time, the teen jumped on the nine-year-old on Sagari’s order and held him tight. The mother then choked her own son with a cloth. The police said Sadhan was also hit in the head with something heavy. The duo then put the dead body in a sack and kept it hidden in the field.
source
Times of India

//////////////Many laws have been made for protection of women e.g. section 498A IPC and Protection of Domestic Violence Act. But these laws are often grossly misused, and have in fact become a weapon in the hands of estranged, cantankerous, vindictive wives to blackmail their husbands. Often FIRs are filed by them falsely implicating not just the husband but also a host of the husband’s relatives e.g. his parents, aged grandparents, uncles, aunts, brothers, sisters, cousins etc. The result is that the police arrests all of them, or often demand bribes for not doing so. Marriageable age sisters of the husband who are falsely implicated find it difficult to get married. The wife often blackmails by demanding a huge sum of money, and the police also often demand bribes.
I suggest a petition be filed in Court seeking similar directions as in the SC/ST Act case to prevent misuse of s.498A and the PDV Act///// 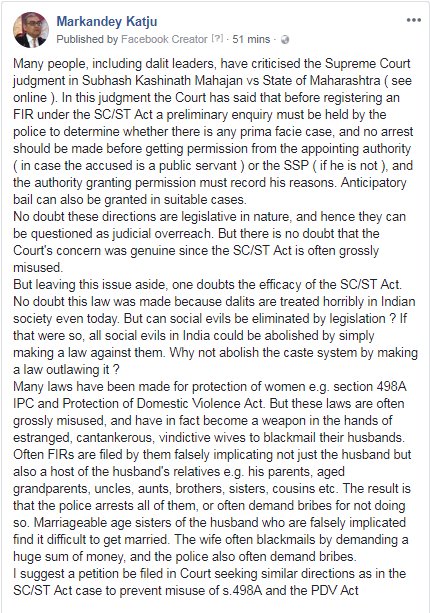 While there are so many corruption complaints against this guy and he has been transferred back and forth, …”  The official said Sardhar might be promoted as joint director, the file for which is pending with the Municipal Administration and Water Supply (MAWS) department. Sardhar is due to retire in February, 2019…..”

So, looks like this corrupt “Babu” will still retire with ALL the glamour and an even bigger pension / superannuation !!

CHENNAI: Directorate of Vigilance and Anti Corruption (DVAC) on Tuesday booked a disproportionate assets case against the Kanchipurammunicipality commissioner A Sardhar.

During the check period of October 2013 to November 23 2017, DVAC found that he and his family members had amassed disproportionate assets of Rs 3.28 crore.

“At the start of the period that we investigated, we found his assets at Rs 2.16 crore. At the end of period the assets were worth Rs 5.58 crore. His income during the period was Rs 51.12 lakh and expenditure was Rs 38.9 lakh. Savings should have been Rs 12.22 lakh but assets acquired were Rs 3.41 crore,” the FIR stated.

A case has been registered under section 13(2) read with 13(1) of Prevention of Corruption Act.

Officials in the Commissioner of Municipal Administration said several allegations were raised against A Sardar when he was the municipal commissioner of Ooty municipality. Many petitions were received by DVAC from residents alleging that there were irregularities in employing contracted workers. There were also several other irregularities in issuing tenders and contracts for various projects, an official said. He was later transferred from Ooty to Kovilpatti. But due to allegations of corruption, he was again transferred, this time to Kancheepuram.

“One petition was also received from a man seeking a job on compassionate grounds that the municipal commissioner sought a Rs 2 lakh bribe for that,” the officialsaid.

Based on the complaints, DVAC raided the houses of Sardhar in Kancheepuram and Chennai in November, 2017, the official said. During the raid, some cash, jewellery and various documents were seized from his home.

An investigation revealed that he had also amassed wealth over a period when he was the municipal commissioner of Ooty, which is referred to in the DVAC FIR.

“But we have not received any complaints against Sardhar from residents of Kanchipuram municipality so far,” the official said.

Despite repeated attempts, Sardhar’s number was not reachable. The CMA, G Prakash told TOI that investigating officers have not yet conducted a departmental inquiry into Sardhar’s actions or initiated disciplinary action against him.

Another senior official said they would wait for the DVAC to submit their report to the government.

The official said Sardhar might be promoted as joint director, the file for which is pending with the Municipal Administration and Water Supply (MAWS) department. Sardhar is due to retire in February, 2019.

Taxes affect MEN the most. 80%  90% of taxes, tarrifs, rates are paid by earning men. Every coalition government has been a disaster in this area as the need to milk the system increases with more parties and politicos lining up to milk the common MAN

It seems the Karnataka coalition government is using every opportunity to loot the common MAN. Water rates have been increased 100 times, 10000% in one go, w.e.f. from the date they came to power.

Water is one of the VERY basic and essential items. This increased cost (10000% increase) will be borne by every earning man (directly or indirectly)

All those who voted this government to power and also supported #NOTA to indirectly help this coalition to have aided and abetted this loot and furthered impoverishment of HONEST MEN (links to our earlier post on NOTA, Karnataka elections)

This is NOT about this politico or that alfa, this is about EVERY family, Every id, Every MAN

The Karnataka government, which claims it is investment-friendly, has dealt a shock to industries by hiking water tariff by 100 times (10,000%). The government cited recommendations by the Krishna Bhagya Jala Nigam Ltd (KBJNL) under the Major Irrigation Department, to jack up rates, which will be effective from May 28, 2018.

According to the proceedings of the state government, a copy of which is with DH, the government revised the tariff of water drawn from reservoirs, lakes, tanks and canals by industries across the state. According to the new tariff, the cost of one million cubic feet of water has been revised from Rs 3,200 to Rs 3 lakh rupees for all industrial uses. Similarly, the tariff for drawing water from natural sources has also been hiked from Rs 1,800 to Rs 1.50 lakh per one million cubic feet of water.

Confirming the hike, a senior KBJNL official said, “There is a need to raise money for irrigation projects. Currently, there is a fund crunch to even manage operational and maintenance costs of the projects. Hence, it was decided to revise the tariff for industrial use. The National and State Water policy of 2012 allows for revision of the tariff. Accordingly, the core committee made the proposal and the government cleared it.”

The eight-member core committee of KBJNL comprises officials, representatives from Water Resources Development Organisation and Advanced Centre for Integrated Water Resource Management. “It took us three years to come up with the proposal and it has been implemented after 10 years. The tariffs will not be revised for the next four years. The committee had recommended revising the rates from Rs 1,800 to Rs 3,200 mcft first, but subsequently it was revised to Rs 3 lakh,” yet another core committee member defended.

Caught off guard, industry czars claimed that they were not consulted about the revision. The iron and steel industry, one of the biggest guzzlers of water in Karnataka, has reacted strongly against the government order saying it is not “justified”.

“The move to increase the water tariff by 100 times (10,000%) is “unscientific” and not maintainable. The government, in fact, should charge industries differently. There should be a lower tariff on industries which have invested on creating pipeline infrastructure to transport water,” Vinod Nowal, deputy managing director, JSW Steel said.