Mom forced me to frame papa on rape charge’

NEW DELHI: Fact can, indeed, turn out to be stranger than fiction. Check out this real-life story.

A man was sentenced to five years’ rigorous imprisonment by a lower court for raping his daughter. The high court found holes in the prosecution story and acquitted him.

The case moved to the Supreme Court and the apex court said such a crime couldn’t go unpunished, awarding the accused a life term.

And now the daughter, on whose complaint the father is in prison, has confessed in a sworn affidavit that her dad was innocent.

She said she had framed him at the instance of her mother whose relationship with her father was strained. This bizarre casesenior lawyers say they’ve not heard of a more weird twist to a casehas raised several questions.

What happens to the punishment given by the SC now that its very basis has been dissolved? Will the daughter and the mother now be punished for misleading the court and tormenting the man?

How common is abuse of the law in shocking cases like rape and dowry? How rigorous is police investigation into such complaints? The story is that of Asha Ram, about whose alleged crime an anguished Supreme Court had expressed outrage, saying he had destroyed “one of the most sacred relations”.

Only last week it had awarded him a life term, setting aside a Himachal Pradesh high court judgment which had disbelieved the prosecution story and had acquitted him.

Wife may get away lightly

In the West, perjury, that is, lying on oath before a court, is considered a serious crime. Millionaire author Jeffrey Archer was punished with a jail term of one year and a fine of 1,75,000 pounds in the UK.

But it is doubtful if Asha Ram’s wife, accused by her own daughter in an affidavit of forcing her to level rape charges against her father, will face as stiff a penalty as Archer, because in India the punishment is not severe.
— Read on m.timesofindia.com/india/Mom-forced-me-to-frame-papa-on-rape-charge/amp_articleshow/1307752.cms

The Bombay High Court recently held that a pressure cooker cannot be considered an item of dowry, while dismissing an appeal challenging the acquittal of the in-laws of a woman who committed suicide.

One and a half months after her marriage to Pradeep Nimbhekar, Kusum was allegedly subjected to torture, leading her to end her life on October 3, 1990.

In an FIR lodged the next day, her father Gopal Ram Bharti had alleged his daughter had committed suicide due to pressure for dowry by her mother-in-law, sister-in-law and brother-in-law. Subsequently, the sessions court at Amravati conducted a trial, and found there wasn’t enough evidence to convict the accused.

The State government challenged the acquittal and appealed to the Nagpur Bench of the Bombay HC. It submitted that the accused had allegedly demanded dowry from the victim in the form of a refrigerator and a motorcycle, and hence must be convicted under IPC sections 498A (husband or relative of husband of a woman subjecting her to cruelty) and 304B (dowry death).

In addition, it was claimed that the mother-in-law had complained to a witness that they had not been given utensils like a pressure cooker by the victim’s family.

The counsel appearing for the acquitted accused submitted that the accused were rightly acquitted as the prosecution had not given evidence supporting the allegations regarding demand for dowry.

They further said that the accused were not present at home on the day of her suicide, and the victim was visited by her father who allegedly assaulted her physically when she refused to leave with him. They argued that this had driven her to commit suicide.

A Division Bench comprising Justices R.K. Deshpande and M.G. Giratkar said in the light of lack of evidence, the lower court had rightly acquitted the accused. They added that an in-law complaining about not being gifted a pressure cooker does not amount to demand for dowry. While dismissing the appeal, the court said, “We believe a cooker is not such an article, which can be taken into consideration as dowry.”
— Read on www.thehindu.com/news/cities/mumbai/pressure-cooker-not-dowry-item-hc-rules/article24266342.ece/amp/

Court finds several inconsistencies in statement of mother and minor girl , observes that the woman was in a dispute with father over his property which became the reason for filing of this #fakeRape case. SICK!!! 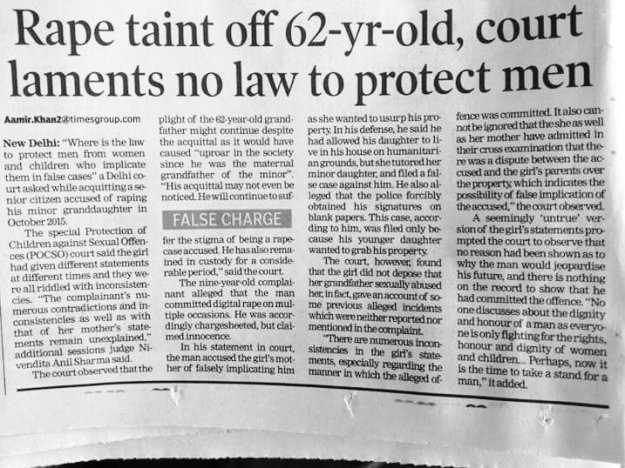