It is alleged that Subashree, a TV actress married a second time without divorcing the first guy. Her modus operandi of marrying, then filing false cases to usurp property seems to have been repeated the second time as well !! Both husbands have appraoched the court to expose this fraud .

Here again she did NOT appear before the magistrate court and so an NBW was issued on her. She finally appeared has taken a further date and left ! 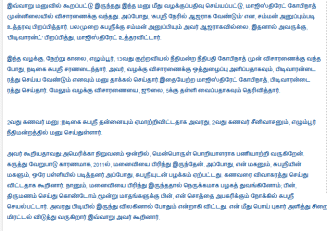