FOLLOW http://twitter.com/ATMwithDick on twitter or https://vinayak.wordpress.com/ on wordpress or http://evinayak.tumblr.com/ FOR 100s of high court and supreme court cases
Rregards,Vinayak
**************** 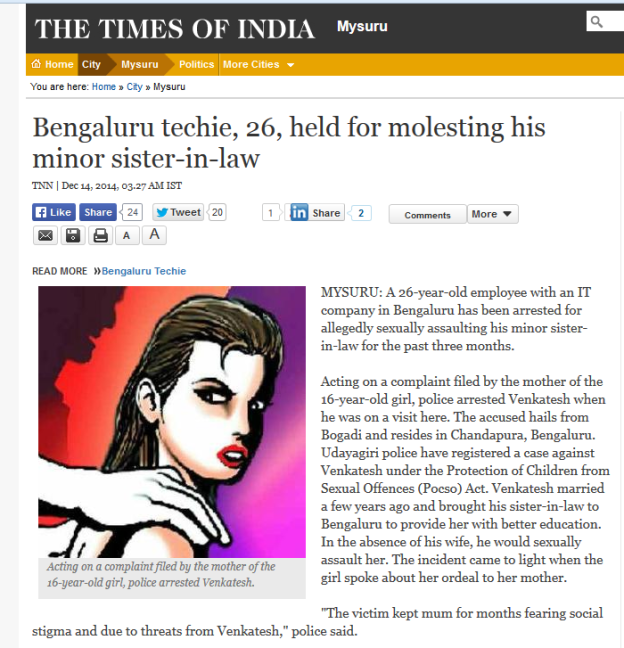 1st throw in-laws OUT. Then throw out husband. Then maintenance. IF Hubby NOT pay, ask same in laws you threw out !!

The Hindu law should be amended to cast a legal obligation on the father-in-law to maintain and pay alimony to the daughter-in-law when her husband is unable to do so, the Law Commission recommended to the government in a report submitted on Tuesday.

Under the existing provisions, a woman does not have the right to claim alimony from her father-in-law or other in-laws if her husband fails to maintain her due to various reasons, including his physical or mental incapacitation, disappearance or renunciation of the world as a religious choice.

The Law Commission, headed by Justice A P Shah, however, held that there was “sufficient basis in classical Hindu law to cast a legal obligation on the father-in-law to maintain the daughter-in-law, when the husband of the latter is unable to do so”. The panel’s report noted that the basis so discovered in the Hindu law lent support to the legislative amendment being proposed by the Commission, as it sought to spell out the father-in-law’s legal obligation to pay maintenance to the daughter-in-law.

“The right of a Hindu woman, whose husband is unable to provide maintenance to her, must be protected,” held the Commission, while recommending to Law Minister Sadananda Gowda insertion of a new clause in the Hindu Adoption and Maintenance Act, 1956.

According to the panel, insertion of sub-section 4 under Section 18 should read as: “Where the husband is unable to provide for his wife, on account of physical disability, mental disorder, disappearance, renunciation of the world by entering any religious order or other similar reasons, the Hindu wife is entitled to claim maintenance during her lifetime, from members of the joint Hindu family of the husband, except where the husband has received his share in the joint family property.”

The clause will exempt only those cases in which the husband has already received his share in the joint family property and in such cases, his wife could get maintenance out of the properties.

The panel said that in case of a man’s inability to provide for his wife, the only remedy available to the woman was to make endless rounds of the court to get some share out of her husband’s properties, which was apparently inadequate and time-taking. The issue was referred to the Commission by the Punjab and Haryana High Court last year in a case where the wife of a man of unsound mind had sought one-fourth share in the land belonging to the family from her father-in-law as maintenance for herself, her spouse and their children. The share was initially provided to her through a settlement but she was later dispossessed of the land by her father-in-law and the dispute then reached the high court.

Police "MAY" question Taroor? Really? Is he NOT inside u/s 304B? Netas have another IPC or what ?